The older I get the more I realize that the old saying about things that have an occurrence rate of 1 in a 1,000,000 is really meaningless.

With about 7 billion people in the world that would make for 7,000 of those all so rare occurences possible each and every day. With them being so common no one should really be surprised when they actually occur. Additionally, with advancing age comes the realization that pretty much everything is connected somehow as long as you can suspend rational thought processes long enough to see the connection.

A good knowledge of useful trivia also helps to see those connections.

At some point the Kevin Bacon game began to replace the one time wildly popular game Trivial Pursuit with a single minded focus on celebrity entertainers. But beyond being a game of mindless cinematic, television and theatrical trivia, the Kevin Bacon Seven Degrees of Separation game was all about the connections.

So before I get to the point of today’s blog, let me get my Kevin Bacon moment out of the way.

Years ago, I was in The United Airlines lounge in JFK Airport. I wasn’t really the sort of guy that would otherwise have access to the lounge, but United opened it to calm the nerves of passengers who were looking at a very long delay before embarking on a very long flight

Sitting in my preferred manner, solitary, I noticed a familiar figure a few tables down., sitting in an equally solitary manner. I was certain that it was Louis Giambalvo, a character actor, with no really great roles in his repretoire, but still one of my favorites.

I finally summoned up my courage and walked over to his table.

When I said, “Mr. Giambalvo”, he looked like he was going to jump out of his skin, maybe expecting that I was some sort of Mafia hit man, he having played to comedic perfection a Mafia boss in Weekend at Bernie’s

He clearly wasn’t accustomed to being recognized.

I immediately sensed his unease and simply told him “I’ve always enjoyed your work” and then returned to my solitude.

I did not shoot him in the back of the head.

Of course, Giambalvo appeared with Ken Howard in The White Shadow, who himself years later would have a recurring role in 30 Rock. Those are both pretty mainstream bits of information, hardly qualifying as trivia.

By now, you’ve probably got it figured out. 30 Rock is produced by Lorne Michaels who was the producer of SNL back when John Belushi was everyone’s Monday morning chatter topic.

And yes, John Belushi starred in Animal House in which a very young Kevin Bacon had a small role.

Now on to what the blog is all about.

As opposed to all respectable financial bloggers who are probably dissecting and analyzing the various outcomes following congressional votes, I could care less. On this Sunday evening while everyone else is waiting to see what further childish games our elected officials will play with our economic future, my thoughts are elsewehere.

No debt ceiling for me, only death sealing the clear connection that is waiting to be discovered.

For today I learned of the deaths of Howard Stein and Robert Ettinger, two totally unrelated individuals who walked entirely different paths in life, yet are extraordinarily connected.

In my mind, anyway.

More amazingly, they both existed in non-concentric paths before Kevin Bacon could play much of a role. 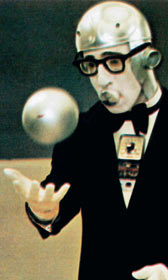 Robert Ettinger, who’d better be sitting on ice right now, was the mastermind behind cryogenic preservation of people and pets. The stuff of science fiction, but more importantly the stuff behind the premises of Woody Allen’s “Sleeper” and Mike Myers’ “Austin Powers”.

I can’t imagine what my life would have been like without “Sleeper”. So may great jokes, premises and sight gags. Since it takes place a couple of hundred years in the future, it’s still not even remotely dated.

Thank you Robert Ettinger, although I’ve never understood why people tell me that I remind them of Woody Allen. Most of the time the reaction that I get is eerily similar to that of Grammy Hall when she met her first Jew.

I do love ice pops, but I’m not really keen on becoming one.

But that brings us to Howard Stern, considered by many to be the master-mind behind the no-load mutual fund and many innovations in the mutual fund industry. Somewhat of an anomaly, he was also a large backer of Eugene McCarthy in his 1968 Presidential bid.

Before he moved over to Dreyfus, the one time scion of the industry, he worked at Bache and Co.

I don’t know if they still exist, but I can still remember the check that was sent to Szelhamos back in the 1960’s or early  70’s representing his profitable sale of Gulf & Western warrants. Somewhere I must still have that check from Bache. It was off by an order of 100.

I think my initial reaction was to deposit it immediately and flee to Jersey.

Szelhamos also sent in about $25 each week to pick up Dreyfus mutual fund shares. That was his ticket toward retirement. As far as that went, he didn’t know better.

Szelhamos worked until he was about 80.

Humor, finance. Almost as good a combination as peanut butter and chocolate. People and mutual funds? Not so much.

Years later, I don’t believe in many things. I certainly am not buying into a Ted Williams existence, nor do I want a Futurama kind of life. Coincidentally enough, that was the subject of the “Evolution” blog from just a couple of days ago.

But by now, you should know that I don’t really believe in coincidence, either.

So it’s with a swelled head that I say that the movement in stocks last week all served to bring my covered positions below their strike prices. In my totally egocentric way I’d like to think that was the pre-ordained direction, being part of an overarching series of connections that I totally anticipated.

The possibility that stocks may move upward Monday morning may not have too much of a meaning for those issues that still have 3 weeks to expire, but it does mean something for the ones that expired this past Friday.

For as we are getting closer to getting an agreement on the debt ceiling this Sunday evening, it appears that precisely the opposte of what everyone was predicting is likely to occur.

The conventional wisdom had been that upon an agreement there would be a market sell-off on the news.

Rather, as the children played and squabbled, the market went down and down.

If that agreeement comes, expect a bungee like snap. And the timing couldn’t be more perfect. Monday morning is my favorite time for stock price increases, as long as I’m not in a portfolio replacement mode. There’s no better time to sell call options than when prices are on the rebound.

Now I may be getting a wee bit ahead of myself as there’s still plenty of time for whoever owns a critical piece of the ball to threaten to take it and go home. That would create another in a series of equally predictable disconnects.

Even if the bungee bounce comes, as expected, the script then calls for a relatively quick return to reality as there will be some other nerve wracking event coming down the pike in short enough order.

I don’t think “pomposity” is an emotion, but between now and the market open, after I climb out of the “Orgasmitron” I’ll be exercising that atitude fully prepared for precisely the opposite to occur.

As it turns out, the likelihood that the expected will occur is more like the 1 in a 1,000,000 phenomenon.

Given how unpredictable events and reactions really are I wouldn’t be completely surprised to discover that I am Kevin Bacon and have been quietly playing a solitary game of Seven Degrees of Separation from Louis Giambalvo.